We have PADI qualified dive masters on site, however instructors need to be booked in advance for both PADI and NAUI courses. You can snorkel from the shore or head out on a dhow to one of several offshore reefs/sand islands. This area is pristine and undiscovered, where swimming is possible all year round.

Kayaking around the coastline with interesting mangrove forest inlets and amazing coral rock formations is definitely worth the effort. Stronger kayakers can also go around the large bays. Kayak trips can be organised into Manza and Moa bays, including down the long estuaries into Manza bay.

There are many species in the mangroves and surrounding coastal forest. Several pairs of fish eagles reside here, as well as storks, wading birds, turns, herons, palm nut vultures, crab plovers and so many more… The famed Eastern Usumbaras (including Amani nature reserve) and southern Mkomazi National Park are excellent bird watching spots and are within an hours’ drive.

The Africa Naturalists Foundation has written a stellar article on the bird watchers delights to be found at Fish Eagle Point. Find the article here!

The outer reef/sand island is 10km offshore, on the edge of the Pemba channel – an approximate 60 minutes in an Arab style dhow. You will see oceanic birds, flying fish, dolphins and tuna from the boat. Snorkelling around these reefs is special. Sightings of humpback whales are numerous from late July to October as they migrate southward to the far away southern oceans.

We have a freshwater swimming pool close to the main living area.

There is an unlisted military fort on the southern end of the peninsula, firstly built by the Germans (WWI) and later the site reused by the British (WWII) when a submarine detecting loop was set up, to protect Manza bay from the supposed Japanese offensive (which never happened), these submarines supposedly carried disposable scout planes. Read the history about the fort here

The Amboni caves, between Tanga and Fish Eagle Point, are the most extensive limestone caves in East Africa and one Tanzania’s natural marvels. Sadly there is little official support for them, but they are well worth a visit. Read more about them here.

Fishing is part of the way of life on the Swahili coast, we promote sustainable and responsible fishing. Besides the fish which we use for food, we practise catch and release fishing, specialising in jigging, popping and drift fishing. Basic equipment is provided although serious fishermen should bring their own specialised gear. 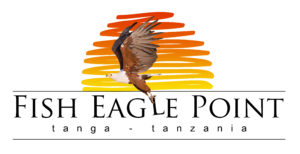 Check out our recent posts on social media

Scroll back to top